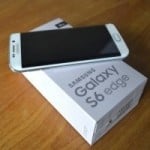 The Samsung Galaxy S6 Edge is the Ferrari to the Samsung Galaxy S6’s BMW, the Chanel handbag to the S6’s Coach. OK, so maybe the differences aren’t that extreme, but you get the point. The S6 Edge earns its right to be called the designer version of the S6, and you’ll pay a premium for it.

Its two rounded sides create a bold, innovative design that isn’t just the first commercial dual-curved display, it’s also probably the best screen on a phone today. And although the S6 and S6 Edge share every major spec and nearly every color, it’s the S6 Edge that looks and feels like a completely different — and far more upper-crust — device. This is the Android phone you want to buy.