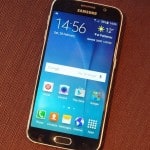 The Samsung Galaxy S6 leaves much of its Galaxy S5 DNA behind. Perhaps even more shocking than this materials about-face are the decisions to seal in the battery and leave out a microSD card slot, both choices made in service to staying slim. These are commonplace omissions in the smartphone sphere, but Samsung has been a die-hard defendant of both the removable battery and the extra storage option, until now. It’s a move that makes a difference, too, at least on the power front. The S6’s ticker ran down faster than last year’s S5 did on a single charge.

In many ways, Samsung had no choice but to adopt this svelte, metal chassis and a pared-down, less “bloated” variation of Android 5.0 Lollipop. These moves silence customer complaints about the Galaxy S5’s (and S4 and S3’s) plasticky build, while also girding Samsung against staggering iPhone profits and an army of decent low-cost rivals from Lenovo, Xiaomi and Huawei.

Luckily for Samsung, the S6 is good enough to win back straying fans while also surpassing the all-metal HTC One M9 in extra features, battery life and camera quality.